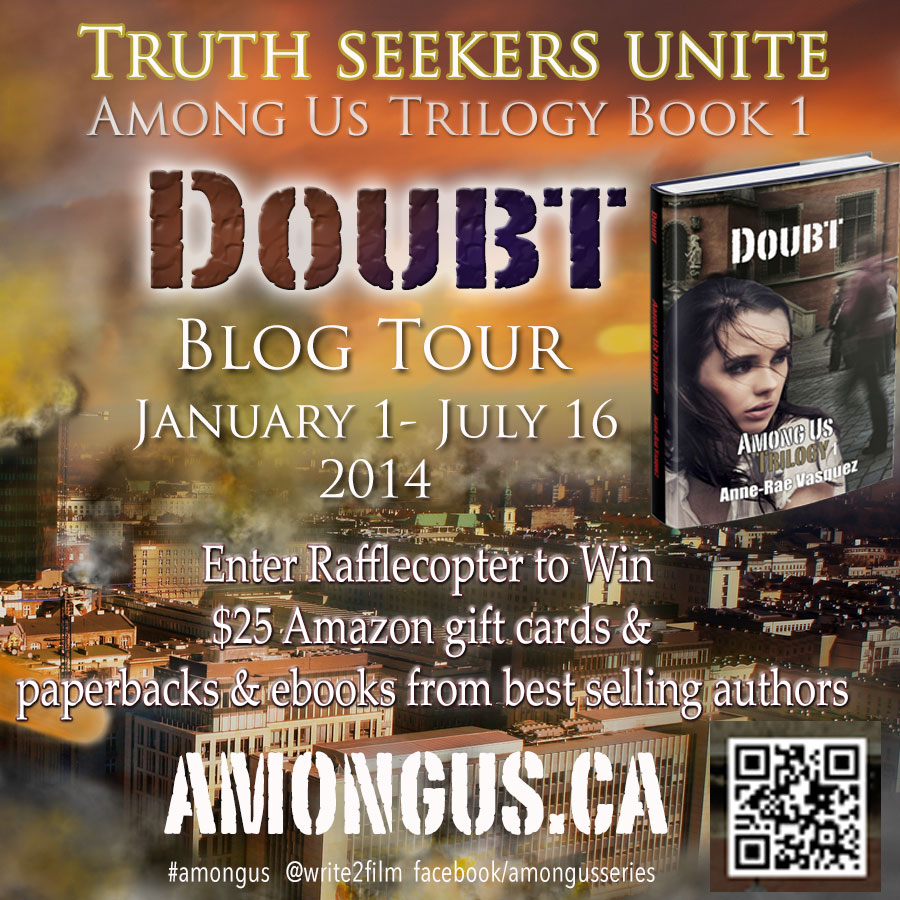 Day 4 of the Doubt – Among Us Trilogy Blog Tour

How I made writing “Doubt” fun and interactive with fans

Doubt (Among Us Trilogy) is a story told in a young/early adult voice
about former child prodigies Harry Doubt, creator of the Truth Seekers
online game, and Cristal Hernandez. Harry decides to take the game
offline when his mother and other gamers’ loved ones family go missing.
Their search for the truth uncovers supernatural forces among them which
inadvertently triggers the beginning of the end of the world as they
know it.

The story mixes social media communications such as text
messaging and video messaging as a form of communication between
characters as they go on missions to find their family members.

All characters have aliases and avatars which is displayed as a
splash page image at the beginning of the book.  The official
website of the book (amongus.ca) also has detailed M.O.’s of the
characters so readers can also view and interact with the characters on
the website.

The story although geared to young adult/ early adult readers is
also entertaining for general readers who are interested in the
supernatural, sci/fi urban fantasy, apocalyptic genres with themes
similar to the TV show Fringe (by J.J. Abrams).

As a filmmaker, journalist and web design programmer, I tell
stories in multiple mediums.  Doubt (book 1 of the Among Us
Trilogy) was literally created from an interactive online reality game
that I created with the help of my developmental editor (Josefina
Rosado).

The official website AmongUs.ca interacts with
visitors allowing them to participate as Truth Seekers following the
theme of the story.

I wanted to give readers another way to connect with my
story.  Entertainment does not need to be contained in one medium. I
believe in telling your story in many mediums. How do we do this?
One way was to entice readers  to participate in the experience of
the story as it is being written.

Putting Theory to the Test

Here was the plan I used for fan recruiting  for my new novel Doubt, Book 1
of the Among Us Trilogy:

Using this approach to write Doubt, I also allowed fans to
participate and shape the story. This has helped build the fan base and
also promote the book launch. The release of the book was November 9,
2013 and because of this approach, Doubt was featured at the Rain
Dance Book Festival in Canada.

If you’re a reader, what do you think of this approach to writing?  If you’re an author, how did you write your novel?

Anne-Rae Vasquez is a freelance journalist for Digital Journal.com,
author, film maker and web design programmer.  Her latest novel,
Doubt, is the the first book in the Among Us Trilogy series.  Her
other works include: the novel and screenplay for the award winning
feature film and web series Almost a Turkish Soap Opera, Salha’s Secrets
to Middle Eastern Cooking Cookbook Volume 1, Gathering Dust – a
collection of poems, and Teach Yourself Great Web Design in a Week,
published by Sams.net (a division of Macmillan Publishing). Almost a
Turkish Soap Opera was her feature screenplay and film directorial
debut. Anne-Rae Vasquez is available for interview.

More details about the author and the book

Click here to check out the interview at Bunny’s Review.

Join us on our tour of the Blogosphere!

Click here to see the Book Tour Schedule. Or click here to enter our Rafflecopter Giveaway with $25 Amazon gift cards and books by best selling authors as prizes!

Take a sneak peek at some chapters… don’t worry, you’re not obliged to buy… just share and tell your friends – hey, we had to try, right?