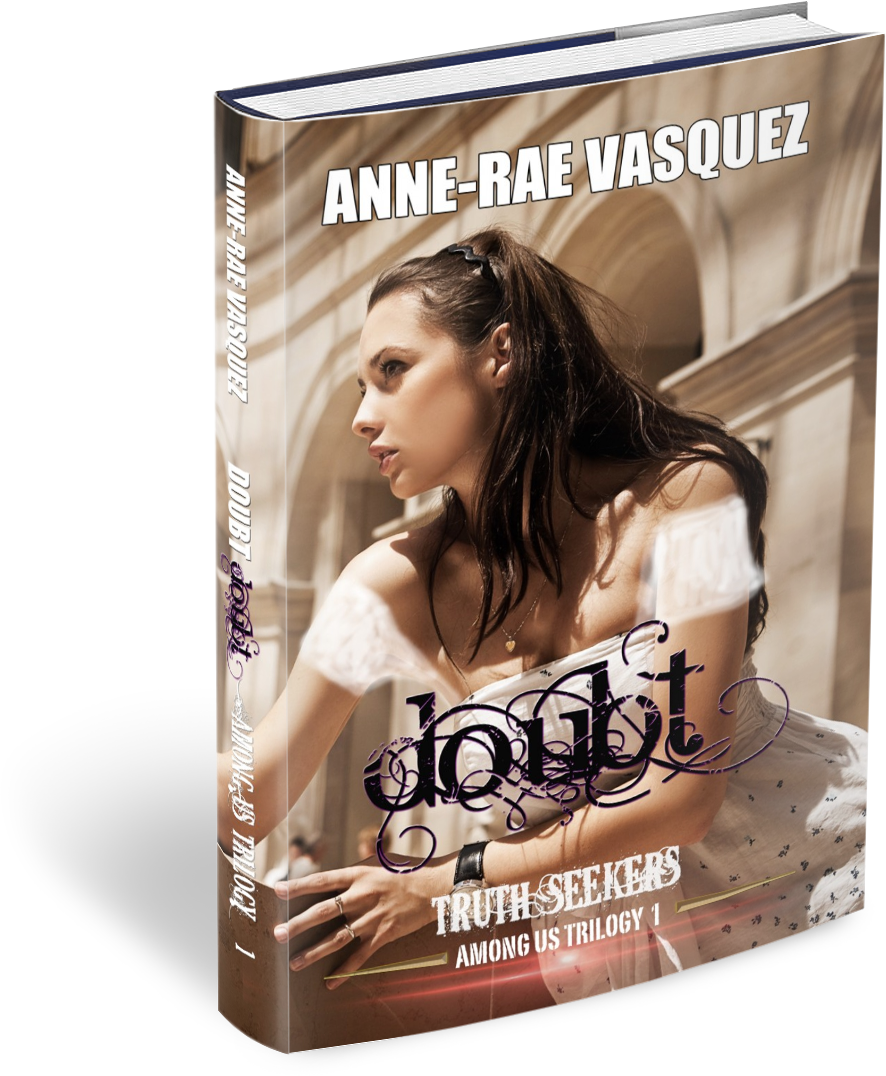 Cristal Hernandez started playing the online game, Truth Seekers when she was fifteen. In her real life outside the game, she didn’t fit in with anything or anybody. Classmates called her “the loner” or “weirdo,” taunting her in the playground because she was always nose deep in a book. Her father went missing on her tenth birthday which haunted her every day since his disappearance. Things are never really what they appear to be. Strange things start to happen to her and her friends. She witnesses unexplainable events and is accused of causing them even from people closest to her.

Evil is lurking everywhere and disguised as many things.But that’s not all she has to fear.

Doubt is Book 1 of the  Among Us Trilogy.    Among Us is a book series which delves into the world of the supernatural and how it intersects with the everyday lives of seemingly ordinary young people as catastrophic events on earth lead to the end of times.  Among Us weaves the theme of a young man and woman, who while not fully understanding their ‘abilities’, are drawn together in their desire to find out the truth about the world they live in which is similar to themes used in J.J. Abrams’ TV shows Fringe and Lost.

…This novel contains a mixture of interesting genres, including fantasy, thriller, adventure, mystery and even romance. The letter in the beginning written to “truth seekers” was a nice touch; a good way to foreshadow what is about to happen.

Doubt is book 1 of an intriguing and exciting trilogy by Anne-Rae Vasquez.  With enjoyable, vibrant young characters fighting a frightening unknown entity in a world that is about to self-destruct, Doubt will definitely appeal to readers of all ages who love sci-fi supernatural thrillers.”
– Owen Choi, author of Amazon Best Seller, Tendrils of Life

A dystopian adventure, edgy and thought-provoking which raises questions about what we’re doing to our society and planet.
This gritty narrative which is fast paced and full of twists and turns is hard to put down till the end.”
– Cid Andrenelli, author of The Burqa Master

International intrigue, encryptions, and clandestine arrangements tumble together in this action-packed plot as young internet gamers use their skills to investigate who, or what, is behind the catastrophic events happening around the globe, led by this season’s newest, and most brilliant, master-mind – Harry Doubt!”
– Emily Hill, author of upcoming paranormal novel Voodoo Vision and award winning, The Ghost Chaser’s Daughter and the Ghost Stories series.

Doubt is a must-read novel that has depth and substance mashed up with fringe science. If you read no other book this year, this is the one to read! – Bryan Miller, author of Kyrathaba Rising

OMGosh! I just finished reading “Doubt”… INCREDIBLE! I couldn’t put it down. Well developed characters with thoroughly explained relationships. Great background info – adds so much to the reader knowing what is going on at all times. Cristal is a great lead. She is strong, smart, beautiful – a brilliant package. The twists and turns and the espionage involving the gamers and the GN kept me on the edge of my seat. The paranormal aspect was something I wasn’t expecting, but was pleased with. The flow/pace was great. The writing was smooth and there were enough ups and downs to keep a reader interested. I’m not sure what to expect next, but know that I can’t wait to read more!” – Lisa W., GoodReads member reviewer

Anne-Rae Vasquez, is a web design geek, freelance journalist for Digital Journal, author and filmmaker.  Doubt is her latest novel, book 1 of the Among Us Trilogy. She wrote the novel and screenplay for the award winning feature film and web series Almost a Turkish Soap Opera, Salha’s Secrets to Middle Eastern Cooking Cookbook Volume 1, Gathering Dust – a collection of poems, and Teach Yourself Great Web Design in a Week, published by Sams.net (a division of Macmillan Publishing). Almost a Turkish Soap Opera is her feature screenplay and film directorial debut.