Rambling thoughts by Anne-Rae Vasquez
When I began writing the Among Us Trilogy, I had been entertaining myself by watching back to back episodes of Fringe. I loved how the story would start out like any normal CIA type of crime mystery TV show and then go completely sideways.  Serious characters would find themselves in crazy and impossible to believe situations and yet would carry on as if it were really happening, taking us, the viewers, into this altered reality.

What was most fascinating is that the story was always told in multiple points of view by different characters.  Protagonists were also antagonists in the story arc or even in the same episode.  And it all made sense even when it didn’t.  Joshua Jackson says it all in this quote…

“I would rather be part of a show that aims for best ever and comes in 2nd than aims for mediocrity and achieves its goal.” – Joshua Jackson

Here is a fantastic interview with Fringe show Producers JJ Abrams and the cast.  Grab a chair and enjoy.

If you just stumbled here and don’t know what Truth Seekers are don’t leave!

At 21 years old, Harry and Cristal are fresh out of university with their PhD’s. Labeled all their lives as being ‘weird’ and ‘geeky’, they find true friendships with other outcasts by playing online virtual reality games. Harry Doubt, a genius programmer and creator of the popular online game ‘Truth Seekers’, has a personal mission to find his mother who went mysteriously missing. He enlists his gaming friends to join in helping him find her and their own missing loved ones. During Harry’s missions, Cristal and the team of ‘Truth Seekers’ stumble upon things that make them doubt the reality of their own lives when they realize there are supernatural forces living among them. This triggers the beginning of the ‘end of the world’ as they know it.

Yeah, guys like reading Doubt from the Among Us Trilogy 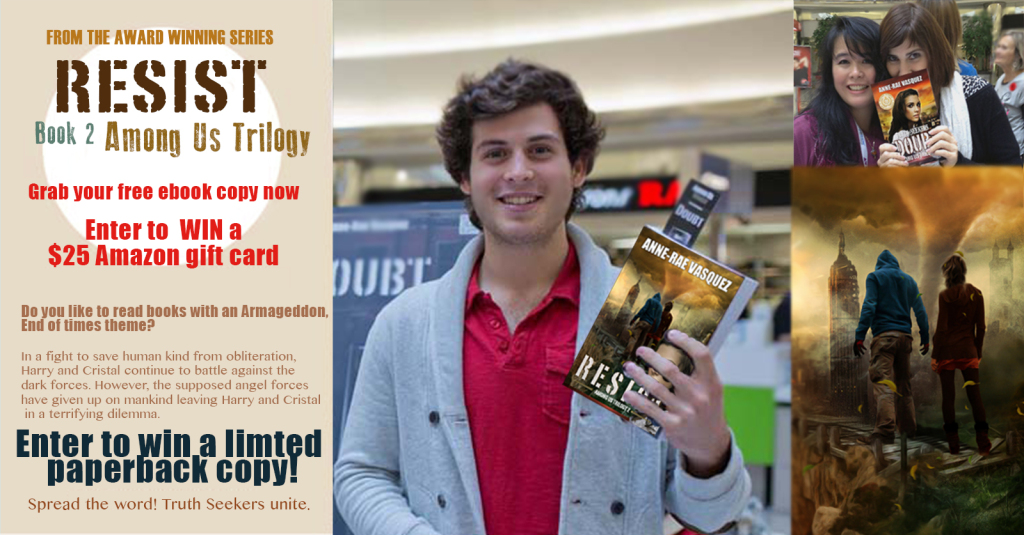 In the spirit of sharing and giving, we at Truth Seekers’ headquarters have put together some fantastic prizes for you from authors who are also honorary Truth Seekers. 🙂

Please show some love for fellow Truth Seekers participating in this Holiday giveaway below.

I feel another Rafflecopter giveaway coming on…

*Winner(s) are chosen at random via Rafflecopter.com *Winner(s) will be contacted if they win and have 3 days (72 hours) after email is sent to claim their prize. If the prize is not claimed within the time frame of 72 hours, a new winner will be chosen. * The new winner will have 3 days (72 hours) from the time of notification to claim their prize. *Doubt book launch team reserves the right to end a giveaway early without notice or prolong if it is deemed necessary.* Doubt book launch team reserves the right to disqualify an entry. * Doubt book launch team is not responsible for lost or damaged items.